I spend time each week looking over old and new recipes, make a grocery list and plan weekly menu. I’m careful to rotate through fish, pork, poultry, red meat and vegetarian meals so I don’t get bored of anything. I make a spreadsheet with my planned meals for each day as well as a grocery list. I take extra special care to group meals that have similar ingredients so that if Monday calls for half an onion I manage to use the other half shortly thereafter.

However, I tend to spend half my Saturday doing this.

Once I get my database of meals I like put together, I won’t have to troll Pinterest for recipes (as much). I’m looking forward to being able to quickly search my own recipes for a meal using a specific ingredient, a noted prep time and a side that cooks at the same temperature for a similar amount of time. Yes, I know I’m crazy. I think I’ve learned to embrace it.

Given that I put a ridiculous amount of time and effort into my meal planning, I was shocked to find myself without all the ingredients needed for the dinner I had planned for the evening. Namely, I didn’t have the stuff for saffron rice. Since I change into my PJs as soon as I get home from work, I wasn’t about to put on real pants and go to the store!

Pinterest to the rescue! I was able to find a recipe I had marked to try where I had all the ingredients on hand (or a close approximate). Luckily, I found something quick to prep, as I was neck deep in trying to make my own breadcrumbs to sprinkle over the mahi mahi in homemade tarter sauce I had scheduled for dinner.

I decided to make a warmed dijon potato salad. Easy. Except I didn’t have red potatoes so I just ran with some russets. Which I cut into small pieces since they were so huge. Seriously, what’s with the monster veggies at the store? I swear I just saw a yellow onion bigger than my head…

The breadcrumbs did not go well. Not at all. I blame gluten-free bread. Once I figure out how to make crumbs instead of bread jerky, I’ll let you know. Anyway, I failed to start the timer on the potatoes while futzing with the bread. By the time the mahi mahi was sprinkled with tiny hand-shredded pieces of bread-jerky and in the oven, I turned back to VERY overcooked potatoes.

They were so done that they mashed themselves when I drained the water from the pot. Crap.

This is what I was aiming for: 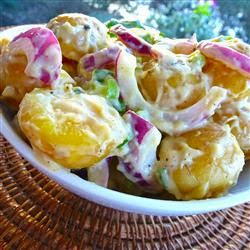 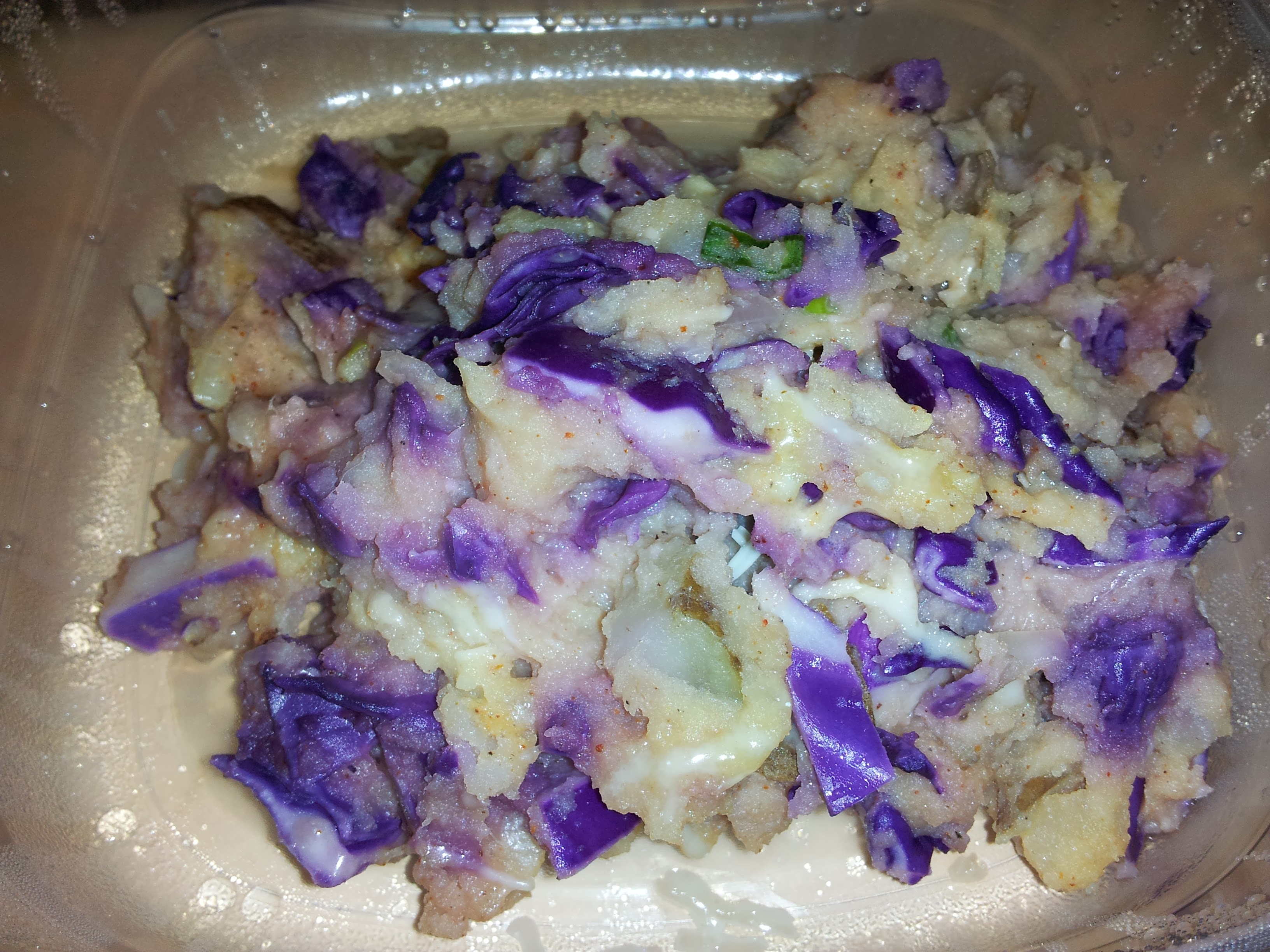 Here’s the skinny with the Moosh:

I realized from the get go that I was going to be missing a key texture since I over-boiled my potatoes. So, I decided there needed to be some kind of crunch. I looked to see what I could throw in and found a half of a head of cabbage that needed to be used anyway. While not the prettiest meal I ever made, I am certain I averted disaster by throwing in the cabbage.

What kind of mishaps have you had in the kitchen? Did you recover or was it a loss?